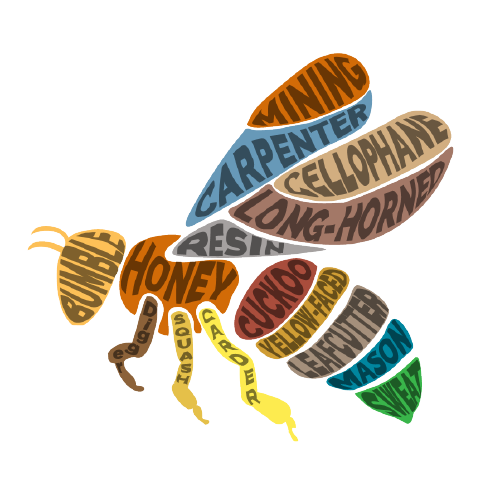 If you are one of the many people who divide “bees” into “honey bees” and “bumble bees”, you might be surprised to learn there are almost 20,000 known species of bees in the world. About 3,500 live in the United States, and in Minnesota, there are probably close to 400. Not even 2% of these are honey bees and bumble bees. The other 98% are mostly solitary bees. Solitary bees, as you might guess, live on their own, not in colonies with a queen and workers like honey bees and bumble bees. It could be said that each solitary bee is her own queen. She builds her own nest, collects her own pollen and nectar, and lays her own eggs without any help from other bees. Some solitary bees may nest in large groups, but they do not actively help each other.

There are seven currently recognized families of bees: Apidae, Megachilidae, Halictidae, Andrenidae, Colletidae, Melittidae, and Stenotritidae. The largest one, Apidae, includes our well-known honey bees and bumble bees. The social, honey-producing stingless bees of South America are included here, as well as thousands of solitary species which nest in underground burrows or tunnels in wood. Long-horned bees or digger bees are burrowing bees known for the extremely long antennae of the males. Carpenter bees are the largest bees in North America, and some are primitively social, though they may be undesirable in some cases due to the holes they chew in wood. Orchid bees are beautiful, metallic tropical bees whose males pollinate orchids as they collect fragrant oils. Cuckoo bees are nearly hairless, wasp-like bees that stealthily lay their own eggs in the nests of other bees.

Megachilidae are solitary, robust bees with large heads and large mandibles, which they use for chewing and handling nest-building material. Unlike other bees, they carry pollen under their abdomen instead of on their hind legs. This family has the greatest diversity of nesting habits among species; building materials can include leaf pulp, mud, resin, gravel, wood pulp, or plant fibers. They also have a wide range of nesting locations including underground burrows, hollow plant stems, wood cavities, rock crevices, and even snail shells in some European species. Megachile pluto, the biggest bee in the world, lives inside active termite mounds in Indonesia. Major groups of Megachilidae are the leafcutter bees, large black bees with light hair known for making nests out of leaves; the mason bees, dark, often metallic blue bees known for making nests out of dried mud; the carder bees, black and yellow, somewhat wasp-like bees that collect plant fuzz to build their nests; and two groups of cuckoo bees. Many Megachilidae are commercially managed for crop pollination as an alternative to honey bees.

Halictidae are all ground-nesting bees with extremely diverse levels of sociality. Some species can even switch between being social or solitary depending on their environment. They are collectively called sweat bees due to some species’ habit of landing on people to lap up sweat (which they do to obtain salts). Many Halictidae are tiny, nondescript black bees with a slight metallic sheen, and are notoriously difficult to identify to species. Others somewhat resemble honey bees with a fuzzy yellow thorax and a black striped abdomen. The most spectacular Halictidae are a brilliant metallic blue-green. The alkali bee, Nomia melanderi, has beautiful rainbow abdominal bands, and is the only solitary ground-nesting bee commercially managed for crop pollination.

Andrenidae are solitary ground-nesting bees which are among the first bees to be seen in early spring. Most Andrenidae are mining bees in the genus Andrena. These are typically medium-sized, shiny black bees with tan to reddish hair covering the thorax, and rarely the abdomen too. Other Andrenidae can be tiny black or intricately patterned bees, large, hairy, bumble-like bees, or black and yellow wasp-like bees.

Colletidae are solitary bees that use a clear biological plastic to line their nests and keep water out, which gives them the common name of “cellophane bees” or “plasterer bees”. Many Colletidae closely resemble mining bees, and even fly at the same time in early spring. Others include the rarely seen crepuscular bees of the desert, which fly in the dark just before the sun rises. The yellow-faced bees in the genus Hylaeus are unique among bees in that they carry pollen in their stomachs, and lack any hair on their bodies. They are also one of the few bees outside of Megachilidae that nest aboveground in hollow stems.

Melittidae is a very small family of solitary ground-nesting bees. They are typically small to medium-sized, black bees with or without abdominal bands of hair. Oil bees in the genus Macropis collect floral oils instead of pollen to feed their young. They are completely dependent on flowers in the genus Lysimachia.

Stenotritidae is the smallest family of bees, and is only found in Australia. These are solitary ground-nesting bees closely related to the Colletidae. They are large, hairy, and black, black and yellow-striped, or bright metallic green.

Which nomination is your favorite?